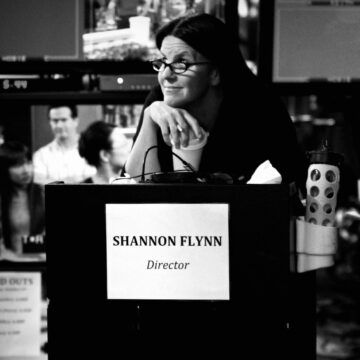 Shannon Flynn is an Emmy Award-winning, multi-platform director. She directs both single and multi-cam shows for a wide variety of networks, including AppleTV, Netflix, HBO/HBOMax, Disney Channel and Nickelodeon.

Having directed more than 300 episodes (including 3 movies and 2 series), Shannon most recently directed a pilot for AppleTV. Also, Helpsters, HBO/HBOMax Sesame Street (including episodes from their historic 50th season) and the much anticipated inaugural season of the Not Too Late Show with Elmo. She helmed the series Betch Sketch for HULU/TeenNick/AwesomenessTV, as well as serving as the series director for Boss Cheer and Hotel de Loone on the YouTube channel Brat. Other recent credits include the movies Spring Breakaway, Holiday Spectacular and Sweet.

Shannon received her MFA in Directing from the Yale School of Drama.

Not Too Late Show with Elmo

Coop and Cami Ask the World

Bella and the Bulldogs

Sonny with a Chance